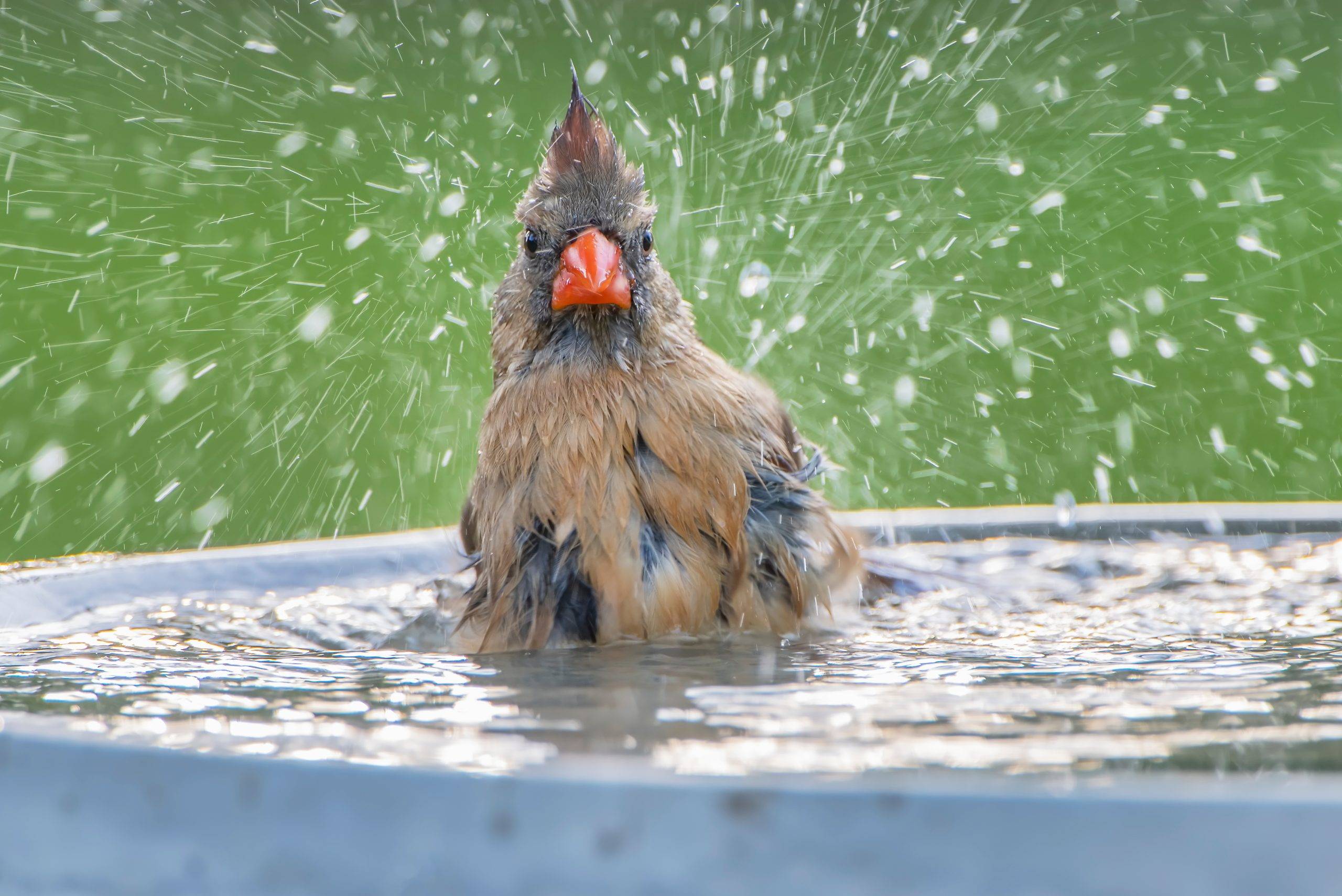 “Once upon a time, when women were birds, there was the simple understanding that to sing at dawn, and to sing at dusk, was to heal the world through joy. The birds still remember what we have forgotten, that the world is meant to be celebrated.”

In our garden, we inherited a crabapple tree. Between this tree and the fenceline is a strung wire we also inherited. It has become the nifty solution to hanging bird feeders, which discourages varmints. It discourages them; it does not alleviate them. In the shade of this tree is found a birdbath. The tree, the feeders, and the birdbath form a power triangle. When the tree has lost its leaves in the winter, it acts as a roost for the birds taking turns at the feeders. In the summer, the birds flit from feeder to water. Now, if you think you have seen the expression of pure unadulterated joy, you may reconsider if you have the chance to see birds wade into a birdbath and flap and shake themselves into rapture. But, of course, most of the time, the birds are content to take a drink. But bird submersion is a wondrous thing.

Birdbaths are an excellent addition to your rewilded backyard nature preserve. They do require brushing out and can always use freshwater cycled. But for this, the payback is worth every investment made. And you will not be alone. The Kagyu lineage has its share of Birdy-Sattvas! In spring, the robins are the first to gather around the bath.

The connection between the Karmapa lineage and birds is legendary. The 10th Karmapa created artwork around birds, while the 13th Karmapa was renowned for communicating with his feathered friends. According to many students and attendants, birds flocked to the 16th Karmapa. Observers remarked that the Karmapa treated his birds as disciples, and they often displayed signs of meditative accomplishment in his presence.

A longtime student of His Holiness, Mary Jane Bennett, recounts a story in The Miraculous 16th Karmapa, when the Karmapa once said to her, “I don’t have to buy birds, you know. I just have to look at them and be with them. Being with them is my best medicine.” Bennett writes that she “could see that was true. After any journey to visit animals of any kind, His Holiness would return with a rosy glow on his face. When His Holiness lay dying in a hospital near Chicago, one of his close disciples, a driver and bird procurer, Steve Roth, brought a rare purple breasted Gouldian finch and left it in his room. The joyful sound of birdsong would accompany his passage to Parinirvana.”

Years before, Roth had asked the Karmapa why he liked birds so much. His Holiness replied, “Just try to sense their joy!” H H 16th Karmapa with birds in his aviary in Rumtek, Sikkim.

I will leave you with a hint of the coming autumn’s installment:

Learning from this rock