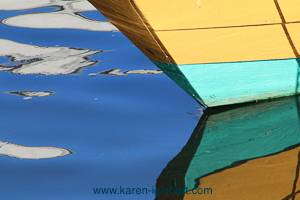 Have you seen Mystery Road?

It’s a detective show set in rural Australia. It’s detective genre to a T, so there are obligatory gunfights and chases, and people we care about in jeopardy, but they speak to each other in a cool burr, full of slang and low tones, and the visuals are unlike anything I’ve seen on television. In one episode a long, high shot of a truck racing through the desert leaves a plume of dust that gets backlit by the sun – it’s a fantastic sight that left me slightly stunned. Another shot of a group of mature women sitting around a 50 gallon drum with a fire in it, lit dimly, so you can barely see the women in the dark, yet it’s so carefully wrought that each one is still recognizable, distinct. At another point the ocean peeks out at the corner of the screen, in a blue so dazzling you forget it is completely incidental.

The characters and dialogue are as elaborated and interesting as the visual landscape. There’s a standoff between an aboriginal woman and one of the local bullies that deserves to be in the film studies books. “This is women’s business” she growls at him, “you have no right here.” Unfortunately, the show gets extremely violent at several points, but not till they’ve skillfully developed all the characters and their relationships with each other, so you really care about the folks being pulverized.

I highly recommend it.

Then there’s The Circuit. Aboriginal detective Jay Swann becomes Aboriginal lawyer Drew Ellis. Both characters are played by Aaron Pedersen, an actor for whom I have an affection bordering on the peculiar. The series, also on Acorn, exhibits Mystery Road’s habit of taking a perfectly irrelevant detail and making visual love to it. Two coffee cups sitting on a table, shot from directly above, become perfect circular pools of beige liquid. A long look down a tree trunk slides you from one scene into another, and the tree’s smooth bark evokes the entire feeling of the place. A jeep drives through a puddle on the road, and the water washes over the hood like a sexy beer commercial or something. The place, rural Western Australia, figures prominently in a couple of different plot points in the brief, 12-episode series, so it’s fitting that the camera makes it all so luscious and immediate. We can get used to hastily put together TV films and shows, we forget how deeply artistic the medium can be. Gratuitous beauty is abundant in nature, but can be harder to find in narrative fiction.

Visuals aside, or again . . . this actor Aaron Pedersen. He’s tall, his characters duck their heads when they get emotional; his character is everything to everybody. He does good and is good; he makes you feel safe, he doesn’t have the slightest rogue in him, and he says everything he needs to say in the fewest words possible.

All of this is, I feel sure without evidence, is the love child of the Australian New Wave cinema of the 1970’s and 80’s. So much inspiration to make beautiful images, and sharp, witty dialogue, characters who have depth of heart, and low drama — it has to have come from somewhere.

And this is not even mentioning Rake.  That show has such incisive, riotously entertaining dialogue, we wonder if the Australian drinking person might not be a match for the Irish drinking person in wit and verbal effulgence.