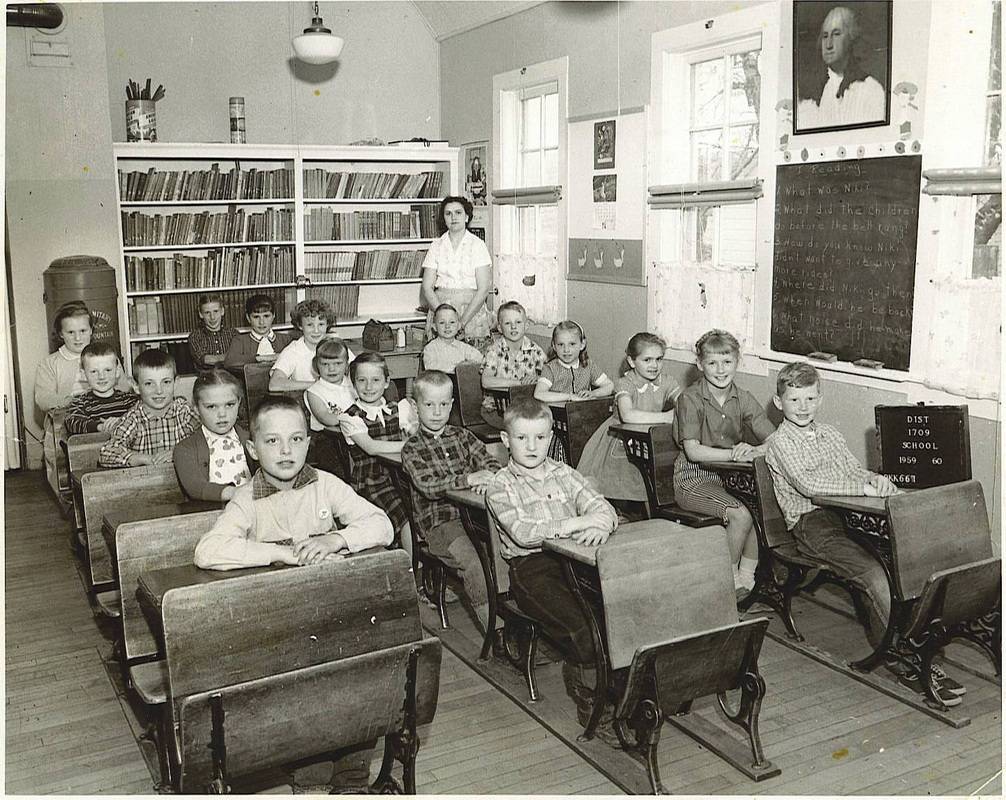 I was six years old, lying in bed and afraid to fall asleep. I had just said my nightly bedtime prayer. “Now I lay me down to sleep, I pray the Lord my soul to keep. If I should die before I wake. .. . “

I thought to myself, “I don’t want to die before I wake”, so I said my own simple prayer, or a wish, I’m not sure which: “Dear God, please, I want to grow up before I die.” That was the first memory I have on my lifetime journey of growing up.

When I was four, our family moved to the land of 10,000 lakes in central Minnesota. At that time, our parents had six children. I was third. We lived in an old farmhouse near a small village, and I shared an upstairs bedroom with my older brother, while my four sisters shared a compound bedroom across the hall. Our cow pasture bordered the cemetery behind the Lutheran Church just down the road, where we went to church every Sunday. Our family always sat in the front pew directly in front of the pulpit. Our parents probably thought it would keep their kids well-behaved and make it easier to listen to the Pastor, but they were proud of their kids and I suspect they also wanted to display their family. The winters were cold, always with a good amount of snow. We kids would play outside making a snowman or would sled down the long hill between the house and the barn. I was too young then to help with the chores – to feed the pigs, collect eggs from the chickens, and milk the dairy cows. I remember one Christmas Eve my dad took me to the barn to help with chores. It would get dark early, so inside the silo I sat on a frozen shelf of silage and held the flashlight while my dad used a pitchfork to throw the fermented feed down the chute. My dad and my mom both worked very hard, and that was just how they related to their world.

Two giant cottonwood trees marked the entrance to our short driveway, bordered on one side by a row of rose spirea bushes. In the summertime the flowers surrounding the house would bloom in turn, beginning with the low Hosta lilies by the back door. On the south side of the house, the lilac bushes with their inviting fragrance would welcome spring. A festival of flowers with a vibrant array of colors and scents would soon follow. There were pink, white, and deep red peonies, orange tiger lilies with their black specks, pink and red roses with their thorns, sweet honey suckle blossoms, snake grass, and the soft aroma of mock orange blossoms that wafted from the hedge next to the porch. On the other side of the drive there were a half dozen apple trees and a large vegetable garden, with a row of asparagus and rhubarb next to the gravel road. The best of all was an exceptionally large raspberry patch with the most delicious berries.

Across the road there was a small swamp of cattails with croaking frogs and the sparking of fireflies in the evening. There were orange and black oriels, red breasted robins with their baby blue eggs in spring nests, garter snakes occasionally slithering through the yard, and buzzing bees hovering around the abundance of flowers. It was a magical world for a six-year-old, a rich display of flora, fauna and the energy of life, including thunderstorms with rain and hail, and lots of mosquitos and flies.

I walked with my older brother and sister to the nearby country school for first grade. A year later I began fifty cent piano lessons from the lady who lived across from the church. The lessons only lasted for a few months, but long enough to make a paper chart with the names of the black and white keys that we placed on the fall board of the old upright piano. When I began third grade, we began taking the school bus to a town twenty miles away that had a combined elementary and secondary school. My older brother would begin to sing in the chorus and play trombone, and my older sister took flute lessons. My parents set basic boundaries – like cleaning up your room, brushing your teeth, doing your chores, not wandering off without telling them, etc – but because there were so many children, they were not overbearing, which I greatly appreciated. They always said, you can be whatever you want to be, so in that way we had a lot of freedom. As kids we learned from and played with each other. It seemed natural when we would get upset while playing with one sibling, to simply play with another. We seemed to naturally understand that relationships always change, and generally it wasn’t a big deal. On the hillside behind the house there were oak trees with vines where we would play ‘tarzan’ and string acorn shells. One day when I was six, I was on the roof of the porch while a few of my siblings were playing around the tree below. I flew from the porch to the tree. No, I didn’t jump. I simply floated down to the tree. At least that was my inner experience. I remember telling my mom that I flew. Sometimes my siblings would gently tease me for thinking that I could fly. For decades I held that moment as a sense of magic in my life, that anything is possible.

The church, our family, music, and the energy and rhythm of the natural world all comprised my early stage of growing up. I was twelve and in sixth grade, when my family moved from the enchantment of the lakes and moist beauty of Minnesota back to the prairies of South Dakota, where I was born.

Who knows what happens to the prayers and wishes we make? The same evening that I prayed to grow up before I die, on the other side of the world a Tibetan monk was leading a group of refugees across the Himalayan mountains to escape the communist Chinese. I really don’t know if there is such a thing as the Butterfly Effect, but I do know that twenty years after my prayer I was reading about Chögyam Trungpa Rinpoche. I moved to Boulder in 1980 to ‘check out Naropa’, where I received meditation instruction. This started my journey to wake up, which was a partial answer to my prayer, but I still did not feel grown up. I began learning how to observe my thoughts during meditation, and soon discovered how much I lived in a fantasy world within my mind.

For 35 years of my meditation journey, for some reason, I barely related to playing music. When I finally began writing songs again in 2016, it was like resuming a relationship with an old friend. Living in this world with too many senseless shootings, rampant homelessness, political divisiveness, and the plight of millions of world refugees, I needed to do some thing. For me, playing musical tones on the piano, and occasionally singing what I was feeling, was how I could connect to my deepest feelings and emotions.

I’ve written a dozen songs in the past five years, all born out of the suffering in the world. The songs are my way of making aspirations for humanity to treat our world and each other better. Since each one of us calls this Earth our home, we are an inter-dependent human family. Whether what we offer the world is great or small, we all have a part to play. Can we look at ‘what we like’ and ‘what we don’t like’, and instead separating our world into friend or foe, can we have empathy and help people regain joy in living?

I studied the Buddhist teachings for years, and early on I read stories about how Milarepa would fly, so it must be possible! It’s been over 60 years since I flew as a child, and now I only occasionally fly in my dreams. But I still have the illusion that anything is possible. And I have learned there is no end to growing up. For me, growing up means we no longer exclude anybody, and we acknowledge that everybody has a gift to give. Even sick people are making an offering to the world, as they give us an opportunity to learn how to care.

In Buddhism it is said that for any result there needs to be a cause, and the cause could be a prayer or an aspiration. As a cause for all beings to live in harmony, I’d like to offer this song called ‘Love Your Enemy’, which I wrote in December. In a way, it is like my childhood prayer, but for everyone: “Dear God, may we all grow up before we die.”

There is a time, there is a place, where I find peace.

I’ve been looking for light, here in the dark, where everything has fallen apart.

What can we do, when we are broken in two, and all we feel is pain?

Where is the part, the part of my heart, that loves my enemy?

The circle of life includes day and night, it has no beginning or end.

All caught up in thought, “do I like it or not?” I created my enemies and friends.

Each one plays a role, as they tug at my soul. Sometimes it feels like hell.

May a part of me know, how I can be whole, so my heart can ring, as clear as a bell.

Go out for a walk; give yourself a talk. Do you need to be brave or be consoled?

Whatever the pain, be it truth or lies, is it a friend, or a friend in disguise?

You might cry or shout, but don’t push it away – whatever you’re feeling today.

Cuz this might be the start, to find the part of your heart, to love your enemy.

From out of the dark the sun will arise, but it always brings a shadow along.

Seems every new day, tries to show us the way—that the shadow and the sun are one.

In other’s company, may we live in harmony, and may we feel at ease.