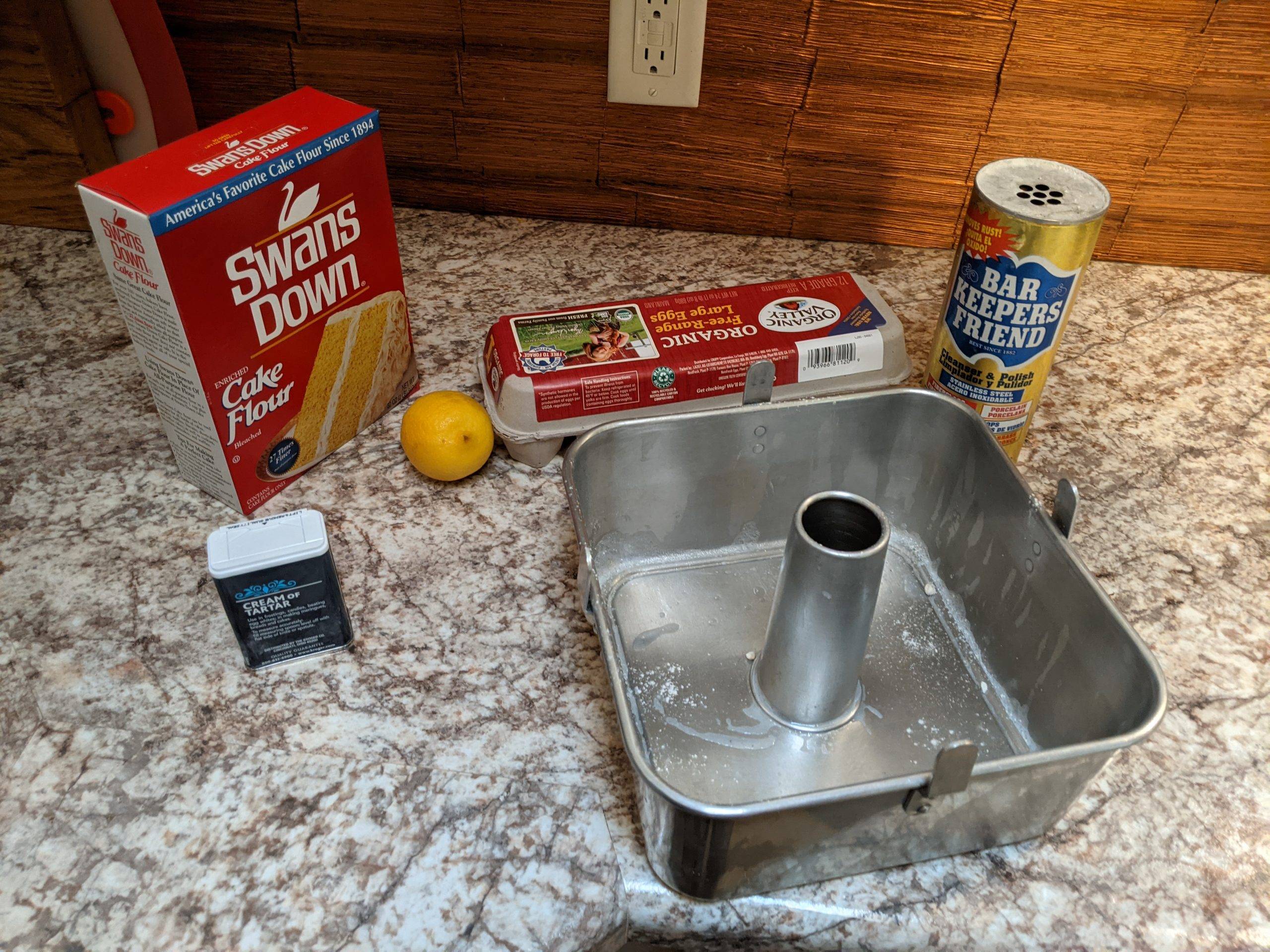 I spotted an angel food cake pan at a resale shop recently. I thought it was cool because it was square; it had the proper insert for the tube, the kind where the tube separates from the rest of the pan; it had the requisite little feet at the top to invert the cake for cooling. I had to have it, and then of course I had to make an angel food cake. I was having friends over for dinner — it was the perfect opportunity to use the new cake pan.

What I hadn’t realized is that making an angel food cake entails the lore and blessings of a religious ritual. I became more and more enthralled as I read the recipe, and as I made it, the full impact hit me. This was a ceremony, a paean, and I don’t fully understand to whom or what it celebrates, but the making of the cake requires the precision, heart, and dedication of performing a full-blown Buddhist liturgy.

There are nine (9) angel food cake recipes on the New York Times cooking site, where I get my recipes. One of them is called Anxiety-free Angel Food Cake; it has two steps, with chocolate and mango and raspberry, and calls for a cake bought from the store. I chose the one called Richard Witty’s Angel Food Cake, because Marian Burros had posted it, and she can usually be relied upon for a sane level of difficulty. Not so fast.

The first step calls for cleaning the pan and the beaters with detergent. Any trace of oil or grease will for starters not allow the eggs to achieve their full volume when you beat them, and secondly, not allow the cake to climb up the sides of the pan as it rises. So the story begins. This is lore; I felt connected to all the bakers before me, and I knew I was in some different territory.

After the ablutions, you separate around 10 eggs. For those who have never separated an egg, one method entails letting the egg white ooze between your fingers as you cup the yolk in your palm. Any teensy spot of shell or yolk will ruin the egg whites, or so my mother had taught me. A coward like me uses three bowls – one to hold the operation over in case of an accident, one to toss the yolks into, and the measuring cup for the whites. I carefully inspected the whites as I transferred them from the bowl over which I’d separated them into the measuring cup, squinting into their milky depths to spot any specks of yolk or shell. All good. Then let them come to room temperature.

The next step is to prepare the dry ingredients. I won’t go into all the details, but suffice to say you hold the flour high while you sift it three or four times, letting it float down onto sheets of wax paper, to aerate. I suppose this is all very scientific, but I couldn’t help but feel we had stepped fully into the world of magic, and that the sifting and resifting were a wordless incantation to the lokapalas.

When you beat the egg whites, you beat them slowly at first, stopping when “foamy” to add flavorings and cream of tartar, then at high speed “and continue beating, without stopping, just until whites form stiff peaks, but are still moist.” I had no idea how to do this, but trusted that the moment would reveal itself to me.

Then there is the beating in and folding in of sugar and flour, in two, three, four additions, all delicately done. Finally, after transferring to the cake pan, “run a thin metal spatula twice through the batter, once near the tube and once near the rim, to eliminate air pockets, and smooth the top.”

Of course on my first attempt I was so absorbed in all of this I forgot the cream of tartar. I stirred it in at the end after the batter was in the pan, so my cake ended up 4 inches tall instead of 6 or 8 inches. Still, I eschewed sawing it into pieces with a serrated knife, instead tearing it apart with two forks held back to back, as lore would have you. I’ll try again, next time I’m invoking the blessings of dinner guests.