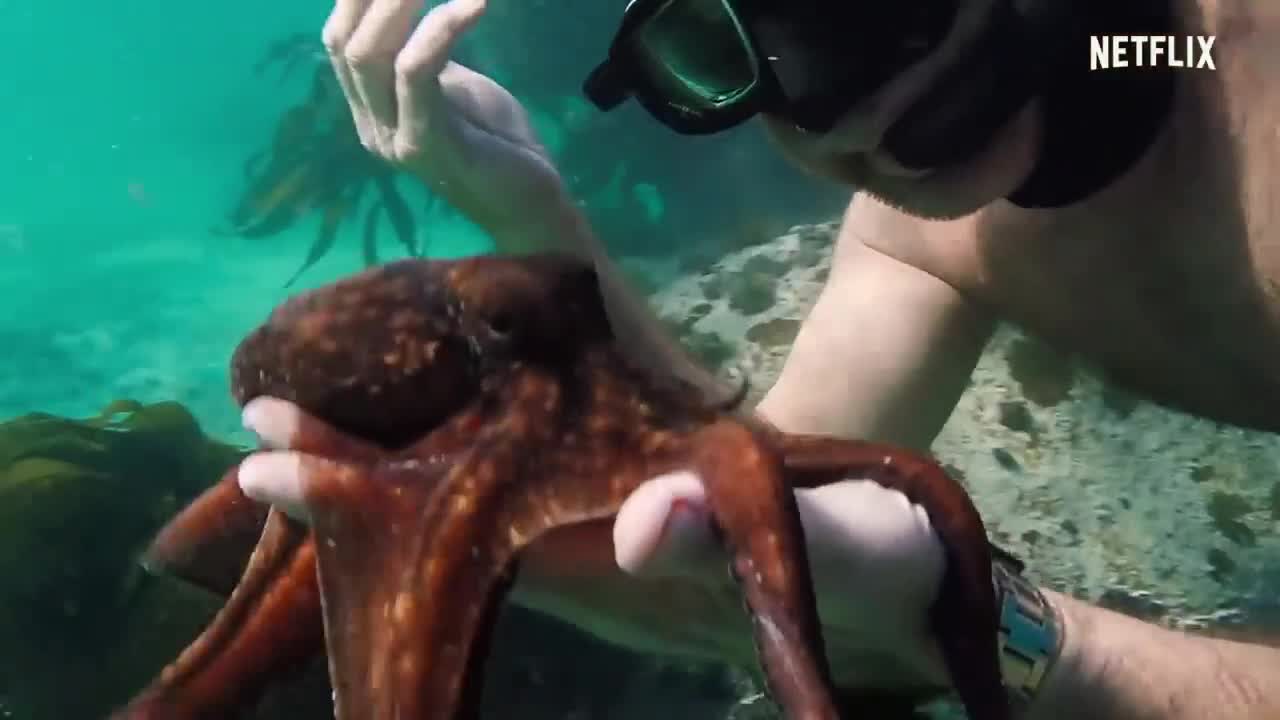 My Octopus Teacher, A Film Review

“Nobody sees a flower – really – it is so small it takes time – we haven’t time – and to see takes time, like to have a friend takes time.”–Georgia O’Keeffe

The documentary, My Octopus Teacher, traces the singular and exquisite friendship that develops between the diver, Craig Foster and his subject, a common octopus (Octopus vulgaris) over the course of nearly a year of daily dives and visits with her. Coming off a 2-year film making project in the Kalahari desert of Africa, totally spent, uninspired, and in need of a radical change, Craig returns to his childhood home on the western cape of South Africa. He remembers the joy he felt as a child diving in the shallow kelp forest there, in the Cape of Storms, on the edge of the chilling and tumultuous Atlantic ocean. The sea beckons him and he begins the acclimation process of diving without gear or wetsuit in the 46°F water.

Craig discovers an unrecognizable mound of shells and stones out of which the octopus eventually emerges and his curiosity is so captivated that he resolves to study, observe and get to know this fascinating creature to the point of obsession, and how grateful we are for his deep dive. We get to see how Craig transforms into an amphibious creature himself, relaxing into the frigid cold, taking long graceful swims amongst the kelp, regulating his breath so as to sustain his underwater forays and up-close encounters with the enchanting mollusk. He narrates every step of the development of their relationship, from the beginning when the octopus becomes aware of his presence and observes him from behind a cloak of kelp, through her curiosity and exploration of his camera, and onto the trust that slowly builds between them which allow them to become an intimate part of each other’s worlds.

The film captures the beautiful and mysterious underwater world that few of us ever see, full of exotic  and strange creatures and plants, “more so than our science fiction.” We learn so much about the octopus, her adaptability, and her intelligence, honed over millions of years, on par with that of cats, dogs, and lower primates. We see her ability to strategize, learn, and remember, skills necessary as she is both predator and prey in these dangerous waters. We witness the drama of her life, full of striped pyjama sharks, her primary predator, and the lobsters and crabs and mollusks she hunts. Her many camouflages, colors, and movements illustrate an endless “creativity to deceive.” And, we learn, she has only one year to live. Craig is there for 80% of it and so we also get to witness the playfulness, vulnerability, trust, sharing, fear, care, intimacy, and preciousness of their shared time together as he documents the arc of her days and his own transformation.

We become privy to “octopus joy” as she dances with Craig in the water, rides on his hand as he ascends for air, plays with a shoal of dream fish, or rests on Craig’s chest in a display of trust, closeness and reunion after having been spooked away for a week. During that week, Craig employs the skills of the master trackers he spent time with in the Kalahari. In this way, he is able to observe closely how she has disturbed the algae, left traces of kills behind and tracks in the sand, until he relocates her and she is clearly happy to be found. Craig realizes that he is stimulating for her intelligence. She realizes he is not a danger to her and it is “absolutely mind-blowing” for him that she so fully celebrates him in her world. Through his deep commitment to his practice of diving every day in order to familiarize himself with this most amazing creature Craig is able to realize his aspiration to be inside the natural world, like the master trackers of the Kalahari, rather than a mere observer.

He comes to care about all the creatures of this wild place, even the tiniest. He learns how each is important and how they are all interconnected and vulnerable. “She taught me to feel that I am part of this place rather than a visitor.” Transported by the beautiful visuals, an extraordinary story of care, commitment, and love, as well as by a lush and dynamic musical score, “My Octopus Teacher,” is a tremendous achievement of art, marine biology, and ecology and an invitation to know, protect, and celebrate our precious world and each other in it.