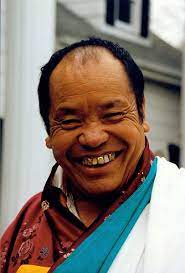 The Day I Took Refuge

The day I took refuge I had an appointment with my meditation instructor to talk about maybe taking refuge.  The appointment was in the afternoon, and that morning I was attending a visiting teacher at the Boulder Shambhala Center. In a blatant attempt to attract students to his teaching mandala, after his talk, the visiting teacher offered refuge to anyone who wanted to take it.  It was one of those packed shrine room events, because the teacher was Kusum Lingpa Rinpoche.  I jumped up and joined the line to officially become a Buddhist, and get my refuge name from Kusum Lingpa.  One of his attendant monks stood next to the throne, wearing dark sunglasses, passing out index cards with our refuge names written on them.

I was chanting lustily the whole time the procession of refugees moved through the line — vajra padma something something.  When I got back to my seat the plain-clothes kasung (the Shambhala security detail), had formed a wedge around my gomden; it was like walking into a box of kasung. I guess it seemed a little nuts, the way I was chanting and all.  After the handing out of names, Rinpoche addressed us saying that the inspiration with which you take refuge influences your entire path, so my wholehearted chanting seemed more okay.

When I met with my MI that afternoon, I proudly showed her the index card with my refuge name on it, Kunchok K’dsum, which translates as either ‘happiness of the three jewels’, or, ‘practice vessel’, depending on the dictionary.

Later I would see Kusum Lingpa in the context of household service, which was a weird experience.  He was savagely avaricious towards his host, threatening to eat all his food and take all his money — and ate only nearly-raw lamb. I was very proud to have taken refuge with such a ferocious, dragon-like teacher. Despite that somebody had said that Rinpoche wanted a glass of water, so I took it in to him, and stumbled in on a bedroom scene with him in his satin pajamas poised on the side of a bed, with two of the more respected ladies of our sangha sitting doing needlework, for his enjoyment presumably.

I didn’t actually think much of it until the woman of the house came up to me, later in the kitchen, all in a fury and asked if I was trying to be servant of the year.  That made it seem curiouser than it already was, but what it implied I will never know.  A friend once told me he’s a Tibetan, so of course he expected sex from the women. I was never part of that game on any level, so it didn’t seem important to me.  These were grown women, presumably they knew what they were doing.

In retrospect, I feel what we need now is a loud, clear statement from our current leadership that the objectification of women is regrettable in any instance, and detrimental to the well being and lungta of women and men equally. But how they’re going to fit that into the current stream of classic, Tibetan cultural and spiritual Buddhism that is being taught and explicitly promulgated, I don’t know.  Much as I don’t know how to make kapsa, the traditional Tibetan pastry that is made and exchanged during the New Year week.  Perhaps I will write a supplication to SMR to teach us in that vein.