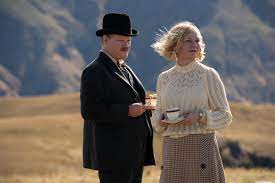 The Power of the Family Dog I like Jane Campion movies (The Piano, the Top of the Lake series) so I had high expectations for The Power of the Dog, her first feature film since 2009. Watching it stream on a TV screen, never the best way to view a Campion film, I was nevertheless caught up in its dire family dynamics on an isolated Montana cattle ranch in the 1920s. It didn’t let go of me, either.  It was the kind of film that keeps screening itself in your head. We’re accustomed to seeing certain things in a Campion film: Strong female characters, gruffly powerful and threatening male characters who are nevertheless emotionally weak or troubled, and a landscape that absorbs the characters and reflects their psychological depths. Women move the narrative and masculinity is typically toxic. One can take some satisfaction, therefore, in the sexual politics of choosing to see a Campion film.

The Power of the Dog immediately starts ticking those boxes. Suggestive landscape … check. Toxic masculinity … check. But then it comes as a shock to realize that the principal female character has been pushed to the side while The Power of the Dog makes us fear for the wellbeing of a civilized heterosexual family menaced by a malicious homosexual outsider. Not only that, it encourages us to root for the nuclear family‘s ruthless revenge against this closeted gay predator. A politically correct romantic queer Western à la Brokeback Mountain this is not. I don’t want to give too much away, but here’s a basic outline: The long cowboy partnership of two brothers is disrupted when one of them takes a wife. Phil, (a great, cagey performance by Benedict Cumberbatch) the unmarried brother — who we learn was intimately devoted to the brothers’ deceased cowboy mentor, Bronco Henry, and keeps a stash of homoerotic muscle magazines — lurks, swaggers and broods and bullies his sister-in-law (Kirsten Dunst) and her pale, introverted son (Kodi Smit-McPhee). The conflict develops into a battle of wits between Phil and the son, with horrific results.

I haven’t read the pre-Stonewall 1967 novel by Thomas Savage (himself gay), so I don’t know how he handled it, but based on the movie’s premise, it seems like the sort of book Anita Bryant might’ve enjoyed reading. But how could Campion have made a film like this? And can I still enjoy it if it appears to depict its gay antagonist as a stalking threat to normative family values? Great cinema is not necessarily great social politics — Birth of a Nation, after all, is both a classic wellspring of film narrative and a racist piece of trash that even its director later apologized for. But you don’t expect to encounter this dilemma in a Jane Campion film. Curiously, even in these unforgivingly PC times, most critics have embraced the movie, seemingly paying no attention to the dated, anti-gay thematics underlying its story. One exception is Spencer Kornhaber at The Atlantic, who did notice the gay problem and hated the movie.

So do I have to hate this movie also? Kornhaber was encouraged in his dislike by his impatience with the film’s gradual unfolding, deeming the movie “dull.” I had no such objection, finding the film’s careful, contemplative approach to the surfaces of its people and terrain to be entrancing. Campion’s films invite you to think, not look at your watch. As in most Campion films, the first thing I see and am drawn in by is mystery, the mysteriousness of this place and the people who inhabit it. As I think about that mystery, the schematics of an anti-gay formula take shape. Disappointing, to be sure. But if I don’t leave it at that, if I sit with the film a little longer, I can see the elements of this formula start to shift and tell different stories altogether.

If, for example, Phil represents the old ways of the wild West that are being displaced by civilized service economy (his sister-in-law’s inn), then this outsider status aligns him with a more sympathetic queerness and it becomes possible, in the film’s denouement, to see his brother’s family as a literally toxic colonial power, a disease that will defeat Phil as it has whole indigenous populations (a fitting resolution, given the film’s long, pandemic-related production delays). Even the son’s bookish, dispassionate interest in science becomes a kind of deadly modernity. Seen in that light, the film leads us to a tragic outcome rather than a panderingly satisfying vengeance. The title is a reference both to the illusory shape of a rocky formation near the ranch and a prayer spoken by Jesus on the cross. (“Deliver my soul from the sword; my darling from the power of the dog.”) It’s ambiguous, though, as to who represents the bestial violence of the dog and who is being sacrificed.

Or seen another way, perhaps Phil’s sexuality is merely a distraction from the fact that he still represents a kind of controlling patriarchy, a phallic same-sex lineage passing its power down from Bronco Henry to Phil. In this reading, the anti-macho, non-gender-conforming son becomes the true queer figure set in opposition to Phil’s traditional patriarchy. Phil can even seem to be the victim of his own self-denial, attempting to bury his desires under a performance of heterosexual machismo.

The more you think about the film, the more the black hats and the white hats of the old-fashioned Western trade places again and again, confounding any attempt to fix a clear political reading. Ultimately, for me anyway, the film returns to the impenetrable mystery with which it began, the surfaces of these faces and these hills.