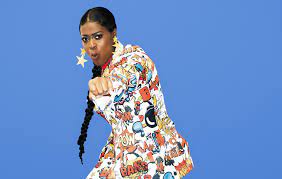 Tierra Whack and Me I once asked the I Ching Online how to express my love for a friend.  It came back with a very lofty view, that I am in a position to see who most needs a miracle, therefore the gifts of heaven are being bestowed upon me.  Now I ask that question, how do I love thee, about two musicians, Tierra Whack and Leikeli47.  These women’s voices. (I’m sure there are others out there as good whom I have not heard yet, a big bow to them.)

An untraceable web of Spotify recommendations, friends’ suggestions, and KJAC 105.5 The Colorado Sound have led me to these poets. Maybe I connect with their work on a subjective plane that is forever idiosyncratic and un-sharable — but Spotify quantifies taste so nicely; it lists how many plays a song has gotten; pretty often I’m in a crowd of 3 million other listeners with my favorite pick, and the next two songs by the same musician each have, say, 400,000 plays and 352,000 plays, and they’re not as good to me either.  Tierra Whack has 2.3 million monthly listeners on Spotify. Leikeli47 has 952,000.

Regardless, I want to express what this music is to me, so I set myself the task of describing something which I cannot describe.  This task has dogged me my entire living life — there’s always something. And I might have only the most marginal access to this music, given the cultural identities that engulf us.  Nevertheless.

Tierra Whack sings about everyday life in a way that always seems on the verge of an important truth, but instead stays grounded in the ordinary and particular. She sings in short bursts of sometimes mumbled lyrical flights, with simple rhymes and simple beats (Clones; Gloria). When she sings, she sounds like she’s singing for the brilliant under achievers. The tonal quality is flat and unemotional while speaking quiet truths (Only Child), without a trace of the coy breathiness that characterizes Billie Eilish, or the snobby post-modern atonal Courtney Barnett.

Her themes are personal and autobiographical (Dolly; Sorry). She often sings or recites in a plain, hypnotic, near-monotone. Still, she sings sweetly — it’s almost like chanting.  One syllable, one beat, which is how a friend once described Hank Williams’ style to me. She hits the high notes gently and clearly (Hungry Hippo). Her simplicity and plainness serve as the perfect backdrop to the lyrics, which somehow manage to be low down but still exciting.

The best thing about Tierra Whack is how the voice, the music, and the lyrics work together. The voice is flat and simple, the lyrics and music are too. You can feel the artist’s personae in each element; each on its own is less remarkable, but they amplify each other.

Often when you hear a stand-out song by some musician, and go to listen to other songs by that artist, the other songs are a big disappointment.  Not so here.  I can listen to Tierra Whack for hours and get the same thoughtful, more or less easy to listen to, reflective, simple music.  The more I listen to her, the more her uniqueness is enriched.  Recently she’ll slide from rap to R&B to pop effortlessly, and never lose her distinctive style.  When she raps, it can vary from speed bag rat-a-tat-tat (T.D.; Unemployed; Toe Jam) to something smoother but still lyrically pointed, like Wasteland or Dora.

If she has a flaw, it’s a self-consciousness that slides into self-indulgence at times.  Clones was the first song I heard of hers; it captured me with its smooth sliding vocals and blunt honesty, but the short, spoken segment at the start is sophomoric.  Quite apart from that, there are lyrics which verge on suicidal ideation (Peppers and Onions; Heaven), but when you watch the videos the plain joy in creating is evident.

Tierra Whack’s first album came out in 2018, and besides the one studio album, she’s put out 3 EP’s and 16 singles, and something like 9 music videos, and 7 collaborations, by Wikipedia’s count, which is a load of work if you ask me.

The first time I watched the music video for Stand Up, a song I’d been enjoying immensely, it shattered my illusions of love — it was a jarring contrast to how I was hearing the song.  For the video, she’s dressed as a queen with a throne and scepter.  The costuming, which must have cost a fortune, was either fantastic self-mockery, or on the nose.  I had been loving how evocative the song was, how much it hinted at meanings, implying whole worlds, like a good rock and roll song does.  The video killed all that.  It was kind of like seeing a favorite sexual fantasy acted out badly on TV.

One last reason to love Tierra Whack.  Her songs are almost impossible to treat as background music.  Every time I listen to a playlist with her vocals on it, I sit up and take notice, no matter how many times I’ve heard that same song. Where Tierra Whack is easy to listen to, Leikili47 is razor sharp and very particularly black; witness these lyrics from Wash & Set:

have to lay down my edges
Install a few racks
So baby don’t touch the tresses
Come come doobie wrap
We see you peeking in, obsessing
You know I like my plaits to the back
With the baby hair looking like a blessing

Suffice to say, of the two, Leikeli47 is more frightening to the privileged white in me. On the other hand, she uses more repetition than Tierra Whack does, and she’s more likely to rap about hair so long it gets caught in the door, as playing a gig in heaven. In Zoom and Chitty Bang she’s gansta dark, and Carry Anne is a revolt against any form of interpersonal dominion.

Both singers reject trendy or conformist ideals of femininity.  In Stand Up Tierra Whack sings

“I really only smile just to show my grill / Rather have the skill than the sex appeal.”  In LL Cool J, Leikili47 not only interrogates the evaluative gaze, but also flatly states her expectations, boundaries, and preferences in a relationship, assumes control and loves having her love on her arm.

One thing I love about Leikeli47 is the unsuppressed anger that slices through her lyrics. Hear the icy/funny edge in Get the Riches:

top of the morning
Can’t stop yawning
Not ’cause I’m tired
It’s ’cause, bitch, you boring
Melatonin
All in yo’ tone and

Look at the faces of the crew in the video for Miss Me.  The compressed anger on these young black faces — on a face that young, it seems anger from pain that’s recently learned and deeply felt. How many artists would include that image? I don’t know, you tell me, but I feel like it’s not many.

Despite these heavy hitters, if I had to describe Leikeli47 in one word it would be insouciant.

She celebrates in style the basics of life.  Wash & Set rocks and raps its way through hair styling, and Money sings with glee over having that.

She’s on top of the world and enjoying it thoroughly.

What I like most about Leikeli47 is the emotional range.  She’s really dark and she’s really light. In the 2022 album Shape Up, the songs range from the crooner-friendly Hold My Hand with its prophetic darkness; to the modern-day romantic ballad Baseball, so sweetly sung; to Zoom which recounts a sudden encounter with an ex that puts the whole crew on alert; to in Chitty Bang she threatens a gang banger who’s been harassing her. In BITM I have no way of knowing what it means to say her layup is wet, but I take it it’s good.

It would be these two I would take to a deserted island; just don’t ask me to choose one.